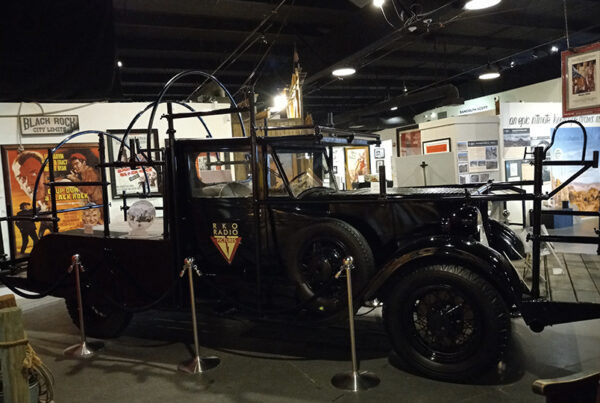 The Museum had been searching for a vintage camera car for many months to add to our exhibit that explores filming technology as used in movies and of course, that supported an era of Western film making. In June 2016, we were able to acquire the 1928 Lincoln in an Auction being held in Shawnee, Oklahoma.

A few calls and a little research with the Benson Ford Research Center at The Henry Ford Museum in Detroit, helped clarify the cars provenance. Built on March 6, 1928, the car, production # 49706, with body type 10-1957 and noted as a 147A, that designation indicates original car was a 4-door, Dietrich designed sedan. The original color was delivered in cobalt blue.

The production car would have had an eight cylinder flat head engine. Somewhere along the 50’s the engine was replaced with a Cadillac 331 with a Carter Quad. The suspension was revised to carry the extra weight of rails, platforms and equipment that were mounted on the car and the universal replaced with a heavy duty International truck rear end. Note: Production records indicate 4204 Dietrich designed cars were sold in 20’s, 1023 in 1928 – the last year they were produced as noted from George H. Damman’s book, 50 Years of Lincoln Mercury.

Once owned by Hollywood Studio, RKO, the 1928 Lincoln has been in the possession of collectors for many years, most recently being owned by Clifton Hill, who has been collecting cars for over 50 years, but has recently decided to liquidate his collection. The car has been used in many movies including the 1981 Orion Pictures film, Under the Rainbow and the 1988 Sony Tri-Star Film, Sunset with Bruce Willis and James Garner. Earlier the car was owned by Pat Hustis, stuntman and legendary camera car pioneer famous for his chase scene work on Steve McQueen’s movie, Bullitt.

The Lincoln was in pretty good condition given it’s 88 years old. While there is rust, there are few areas rusted through! As noted, the original engine was replaced with the Cadillac 1953/1953 V-8 engine. We are told the car has not “run” in over 20 years.

Through generous donations of our membership and friends and financial support of the Museum Board, we were able to raise the funds to acquire the car and to transport it from Shawnee. Preliminary work in Lone Pine with the assistance of Jeff Ray, prepared the car for a modest restoration. David Mull, NAPA, helped in acquiring new tires.

Doug Brown, Browns Salvage in Bishop, had his team sandblast the years of rust and paint off. Tib Wilkinson, Inyo Mono Body’s team has painted the car black. A RKO emblem, graces the doors to pay tribute to the cars original heritage.

The Museum is fortunate to have a few large reflectors, lights and other standard accessories that were typical for camera cars. We are in talks with a few collectors to add some additional features, hopefully adding a few Mitchell cameras, typical of the era, to complete the exhibit.

Dietrich Inc. was an American coachbuilder founded in 1925 by Raymond H. Dietrich (1894-1980), co-founder of LeBaron Incorporated in New York. He was a close friend to Edsel Ford who supported him by talking Fred Murray, owner of the Murray Body Corporation into partly financing the venture.

Dietrich, Inc. did substantial styling work for standard bodies for Packard, Franklin, and Erskine, a corporate make of Studebaker. Further, Dietrich, Inc. built custom bodies to single orders, and proposed semi-customs (similarly built as full customs, but in small lots of usually 5-10 units) for the catalogues of Lincoln (then headed by Edsel Ford) or Packard. Raymond Dietrich further was a design consultant with Packard.

Dietrich retired to Kalamazoo, Michigan in 1960 at the age of 66. At the time, Kalamazoo was the home of Gibson Guitars. In 1962, Gibson boss Ted McCarty, convinced Dietrich to come out of retirement to design a new solid body electric guitar that would not be limited by the traditional ways of designing and engineering an electric guitar. The result was the classic, ‘reverse’ Gibson Firebird, released in 1963, one of the most iconic and recognizable electric guitar designs ever.

Released May 2008Paramount Pictures. The first film in the Marvel Cinematic Universe, Iron Man was directed by…