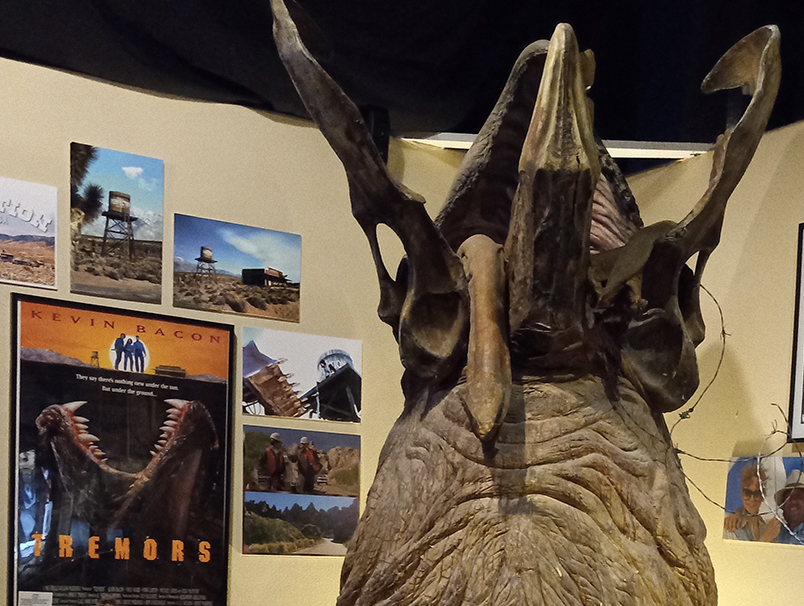 Tremors (1990) takes the best aspects of those fun science fiction films of the
fifties– likeable cast, superb monsters, lots of action – and transposes them to a contemporary setting, without losing the essence of the 50s genre. Whilst the fear of nuclear war between the USA and the Soviet fueled the nightmares of directors from that epoch, the Soviet threat still features within the film Tremors but the only person who fears it is a mad hillbilly weapons expert who is mocked for his over-preparedness. Obviously, when the monsters come, he is the one who they all run to for help.

It is difficult to isolate exactly why the film is so marvelous, but it is telling that it is nigh on impossible to find something wrong with it. The budget was a very
modest 11 million dollars, which means that the effects work has a sense of DIY about it, but if anything this only makes the film better. The spirit that goes into animating the “graboids” – giant man-eating underground worms – is very much the same as that which saw greyhounds wrapped in shaggy coats to masquerade as The Killer Shrews! The sparse location, the tiny town of Perfection, Nevada, adds a chilling sense of isolation, with the underground menace rendering any conventional method of escape impossible. Scenes of characters trapped on rocks in the middle of the desert show an almost Hitchcockian ability from director Ron Underwood to make the most of a confined space. The writers, SS Wilson and Brent Maddock, were also responsible for Short Circuit, another subversively comic flick which has likewise stood the test of time rather better than some of its contemporaries.

The small cast is flawless, and so eclectic that the casting director deserves some sort of medal. Our leading men are Valentine McKee and Earl Bassett, beautifully played by Kevin Bacon (in possibly his finest role, aside from Murder in the First) and Fred Ward (never better), two small town handymen whose dreams of escape to the city are hampered by the graboids’ attack. Aforementioned well-armed hick Burt Gummer is played by Michael Gross, best known as the loveable patriarch in Family Ties, while his equally trigger-happy wife Heather is country and western singer and TV star Reba McEntire. Other familiar faces in the cast are Ariana Richards (three years before her role as Lex in Jurassic Park) and Victor Wong, whose long career included a role in King Kong, adding an element of monster cyclicality to the film.

Of course, no monster movie would be complete without scares, and Tremors has them in spades. While the tone never strays too far from comic, a couple of the scenes where Val and Earl discover what has become of some of their fellow residents still pack a jolt, and there is a great jump moment involving a generator.

Tremors’ success spawned a series of straight to video sequels and a television series, which unfortunately (but unavoidably) demonstrate the law of diminishing returns. However, the fact that the original is so perfect means that the second film is still very good indeed, showcasing some remarkably impressive early CGI work. Tremors’ continuing legacy is a sign of just how brilliant the original film is, yet it remains shamefully unrecognized as a classic.

The Museum’s Tremor’s exhibit is quite fun and includes Graboids, Shriekers and a replica of the town,
Perfection, Nevada.

But, let’s start with what is a Graboid?

First introduced in the 1990 film Tremors, Graboids are depicted as subterranean animals, superficially resembling gigantic worms or grubs, with long cylindrical bodies. When fully grown, a Graboid will be up to 30 feet (9.1 m) long, and 6 feet (1.8 m) across at the widest point, and weigh 10-20 tons. Graboids have no eyes; they do not need them, due to living underground. Their heads consist of a massive black armored beak, which is used to push aside the dirt whilst digging. The beak opens like a grotesque flower; it consists of a wide upper jaw, a thinner lower jaw, and a pair of hooked mandibles, one on each side. Whether or not they have a skeleton is unclear, but a faux scientific document written by the SyFy channel hypothesizes they have a semi-rigid internal structure, similar to the cuttlebone of cuttlefish. The Museum is pleased to have the original Graboid, minus the hydraulics in our exhibit.

We see two of the three known stages of a Graboid’s life in our exhibit. The first is the underground dwelling stage, dubbed the “Graboid,” and the most well-known form of the creature. The second is the walking stage when the Graboid leaves its underground skin and grows two legs, dubbed the “Shrieker.” The third, not on display, is the flight stage where they still have the appearance of stage two but with wings, and a tail that launches flame, dubbed the “AssBlaster”.

Perfection, Nevada is a fictitious desert community which serves as the primary setting for the 1990 film Tremors made up of mainly Chang’s Market, the general store that doubles as a post office, run by Walter Chang

Released May 2008Paramount Pictures. The first film in the Marvel Cinematic Universe, Iron Man was directed by…